Detection, identification and quantification of GMOs in the environment and in food and feed

Aside from its expert appraisal activities, the Service Biosafety and Biotechnology (SBB) of Sciensano has always been closely involved in scientific research and the detection of GMOs, through the activities of its laboratory.

The main role of the SBB laboratory, which was established following the approval of the Cooperation Agreement on Biosafety, is to support the country's inspection services within the scope of monitoring the deliberate or accidental release of GMOs into the environment or the marketing of GMOs, particularly for food purposes.

This surveillance requirement stems from several provisions established by European Directives 2009/41/EC and 2001/18/EC and their transposition into Belgian law, and by European Regulations (EC) 1829/2003 and (EC) 1830/2003. This legislation introduces rules for the traceability and labelling of genetically modified organisms and products derived from GMOs throughout the food chain. The European regulations establish compulsory labelling of products intended for human or animal consumption if they contain more than 0.9% GMO per ingredient. The Member States must ensure that product inspection and control measures, including sampling checks and qualitative and quantitative analyses of foodstuffs, are applied.

The research activities of the SBB have led to the development and patenting of an original approach to GMO detection. This integrated approach, named COSYPS, has been in use since 2005 and makes it possible to simplify the identification and quantification stages. It consists of three sample analysis stages, all based on real-time PCR technology. This technology is based on the detection and quantification of a fluorescent reporter whose emission is directly proportional to the quantity of DNA fragments generated during the PCR reaction. The entire process is automated from start to finish​.

To date, all GMOs falling within the scope of Regulation (EC) 1829/2003 can be identified using the detection platform developed by the SBB.

Since June 2010 and the reorganisation of the services, GMO laboratory analysis and research activities have been integrated into a newly created "Platform biotechnology and bioinformatics​". The GMO laboratory is therefore no longer part of the SBB.
Despite this functional separation, it is clear that the laboratory activities and expert appraisal activities regarding GMOs will continue to actively interact in the future. Indeed, these two aspects are complementary and share the same objective of supporting the competent authorities in the field of biosafety. 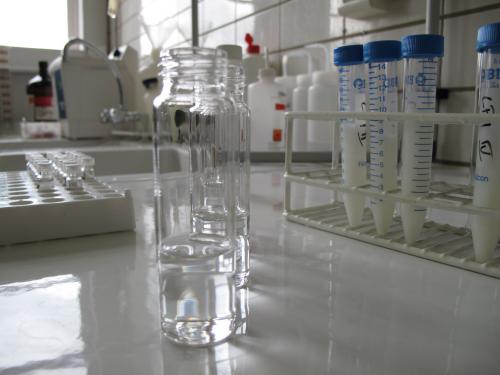 At the start of the 1990s, research was initiated (particularly within the scope of an EU project BRIDGE) into the application of PCR (Polymerase Chain Reaction) as a detection and identification method for pathogenic fungi or fungi of biotechnological interest (Streptomyces, Trichoderma, Aspergillus, yeasts). This research marked the beginning of the SBB laboratory's specialisation in the development and application of gene detection and identification methods in food and environmental matrices. These methods are essentially based on the use of PCR.
In the years that followed, the SBB participated in various projects funded at Belgian level (Sciensano, Federal Science Policy, Ministry of Public Health, Ministry of Agriculture) or EU level (particularly via the 5th Framework Programme of the European Commission) related to various topics such as:

Between 2005 and 2009, the SBB laboratory has been involved in the EU's Co-Extra project (financed by the 6th Framework Programme of the European Commission) on the coexistence and the traceability of GMOs with a view to ensuring the coexistence of supply chains using GMO products, conventional products or products derived from organic farming. In particular, the SBB's research activities in this project have addressed improved performance levels and the reduction of costs in relation to GMO detection and quantification methods via the use of PCR.

These various projects have resulted in the establishment of recurrent collaborations with other Belgian and European laboratories involved in the detection and identification of GMOs, particularly the Instituut voor Landbouw- en Visserijonderzoek (ILVO, Flemish Institute for Agricultural and Fisheries Research) in Melle and the Centre wallon de Recherches agronomiques​ (CRA-W, Walloon Agricultural Research Centre) in Gembloux.

However, it should be pointed out that the SBB did not wait for the implementation of the cooperation agreement or the aforementioned European regulatory texts to draw the attention of the Belgian and European authorities to the importance of developing and mastering the molecular genetic techniques required to detect and identify GMOs. That is because detection and identification constitute the key to enable the competent authorities to exercise their duties of regulating the market and overseeing the provisions in force regarding surveillance, traceability and labelling.

In December 1996, the Belgian authorities placed the SBB in charge of checking the import into Europe via Belgium of transgenic maize by the Swiss company Ciba-Geigy (now Syngenta), a transgenic maize that was not authorised in the EU at that time. Analysis of the genetic map was completed within two weeks (in collaboration with the Robert Koch Institute in Berlin) and confirmed the presence of unauthorised transgenic maize. Beyond the controversy surrounding this first importation of GMOs into Europe, this analysis demonstrated the possibility of quickly tracing specific GMOs with a sensitivity of at least 1 transgenic grain among 1,000 others.

Soon after the first analyses aimed at detecting and identifying GMOs, the idea of a European network of GMO laboratories was launched in 1999 in Ispra (Italy), at the Joint Research Centre (JRC) of the European Commission. This network was opened by the European Commissioner for Research, Philippe Busquin of Belgium, in December 2002. Sciensano had the honour of delivering the inaugural speech in front of the directors of some 50 scientific institutions and the international press.

The European Network of GMO Laboratories (ENGL) is currently made up of over 100 member laboratories appointed by the competent authorities of the 28 Member States, Turkey, Norway and Switzerland. The principal missions of the ENGL are the development, harmonisation and standardisation of sampling, detection, identification and quantification methods for GMOs or GMO-derived products from a wide variety of matrices, covering seeds, cereals, foodstuffs, animal feed and environmental samples. In June 2008, the JRC and the ENGL arranged the first global conference on GMO analysis.

The Belgian component of the ENGL, namely the National Reference Laboratory for Genetically Modified Organisms (NRL-GMO), was officially set up in 2006. It is made up of Sciensano (the federal laboratory for the GMO detection) and the ILVO and the CRA-W which house the regional GMO detection laboratories. The NRL-GMO is coordinated by Sciensano. It works to support the Belgian Federal Agency for the Safety of the Food Chain (FASFC) within the context of implementing Regulation (EC) 1830/2003. In particular, it has the task of promoting the application and development of new GMO detection, identification and quantification methods in food matrices.

The European consortium ENGL, including the Belgian NRL-GMO, works to support the European Union Reference Laboratory for GM Food and Feed​ (EU-RL-GMFF, formerly the Community Reference Laboratory), which was established in accordance with the provisions of Regulation (EC) 1829/2003. The main task of the EURL-GMFF is the scientific assessment and validation of detection methods supplied by notifiers within the framework of marketing authorisation applications for GMO food or feed.

This pooling at the EU level of efforts to detect and identify GMOs is more than never justified, due to the growing number and diversity of GMOs grown or marketed in the food industry worldwide.