Biological risk assessment is a process that includes the identification, the probability of occurrence and the severity of a potential adverse effect on human health or the environment associated with a specific use of a GMO or a pathogen. A known risk will lead to the implementation of appropriate prevention measures.

The assessment of biological risks is not based on theories developed by technocrats, but rather on an empirical basis following an awareness of the scientific community of the hazards posed by the handling of pathogenic organisms (highlighted through studies on infectious diseases acquired in the laboratory) on the one hand, and of the hazards potentially associated with experiments involving recombinant DNA on the other hand.

This assessment forms the scientific basis that enables any activity involving GMOs and/or pathogens to be authorised or prohibited and, if necessary, possible measures to be implemented with the aim of mitigating potential risks to human health and the environment.

Risk assessment is one of the three elements of risk analysis, the other two being risk management (which traditionally fits within the tasks of the decision-makers) and risk communication (towards stakeholders, the public...). In theory, these three elements are separated and sequential but, in practice, the boundaries between them are sometimes quite hazy and permeable.

The risk assessment of contained use activities involving pathogens and of activities involving GMOs should be carried out on a case-by-case basis (meaning that it depends on the GMO or pathogen concerned, the introduced genes, and the intended use) while being based on established science (known scientific facts, results published in recognised scientific journals). For GMOs to be released into the environment, a "step-by-step" assessment is applied. This means that the containment of GMOs is reduced and the scale of release increased gradually, step by step, but only if evaluation of the earlier steps in terms of protection of human health and the environment indicates that the next step can be taken. The assessment in every further step takes therefore into account results obtained during the previous steps.

In accordance with the above principles and methodology, a biological risk assessment should be conducted in six steps, in an integrated process and in an iterative manner, as follows:

Many risk assessments have been carried out to date worldwide on the contained use of GMOs or pathogens as well as on the release of GMOs into the environment, their use as food or feed, or as medicinal products. The basis for these risk assessments has evolved gradually taking into account the most recent scientific and technical data.

It is important to distinguish prevention (which is a response to a known risk) from precaution. According to the European Commission (Communication from the Commission of 2 February 2000 on the use of the Precautionary Principle​), the precautionary principle can be invoked when the potentially dangerous effects deriving from a phenomenon, product or process have been identified through scientific and objective evaluation, but this evaluation does not allow the risk to be determined with sufficient certainty. Resorting to the precautionary principle therefore sits within the general framework of risk analysis but is particularly relevant to risk management. Resorting to the precautionary principle is only justified when three preliminary conditions have been met; the identification of potentially negative effects, the assessment of available scientific data and the degree of scientific uncertainty.

The risk assessment of GMOs and pathogens generally does not take into account the notion of associated benefits, nor any other societal, economic or ethical aspect linked to the use of the assessed organisms. These aspects will possibly be considered by risks managers at the time of decision-making. It should be noted however that, at EU as well as at international level, voices are increasingly calling for the potential socio-economic impacts of the use of GMOs to be specifically assessed, in particular in the context of their cultivation and use as food or feed. Whether such an assessment should be integrated into the current risk assessment process or treated in a separate way is still a matter of discussion.

Activity of contained use

In the case of a contained use activity, the procedure ends with the identification of the risk level associated with the GMO or pathogen used. On this basis, containment and other protection measures (working practices, safety equipment, contaminated biological waste management) to be adopted are determined. The analysis carried out leads to the classification of the contained use into one of the 4 existing risk categories (level of risk increasing from 1 to 4). The final stage consists of definitively classifying the contained use activity, which will be confirmed by a re-assessment of the whole procedure. 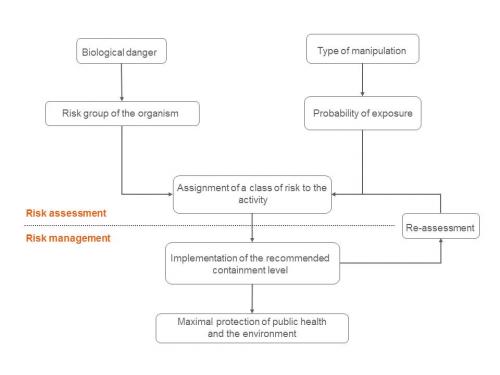 Figure: Application of risk assessment and adoption of risk management measures in the case of contained use of a GMO and/or pathogen

In the case of deliberate release of a GMO into the environment (for experimental or commercial purpose) or the use of a GMO as food or feed, the GMO must be fully characterised at a molecular level. The aspects linked to the potential consumption of the GMO (toxicity, allergenic potential, compositional analysis, nutritional value) and/or to its environmental impact (agronomic parameters, possibility of release or transfer of genes, impact on non-target species, etc.) are also the subject of a detailed assessment. 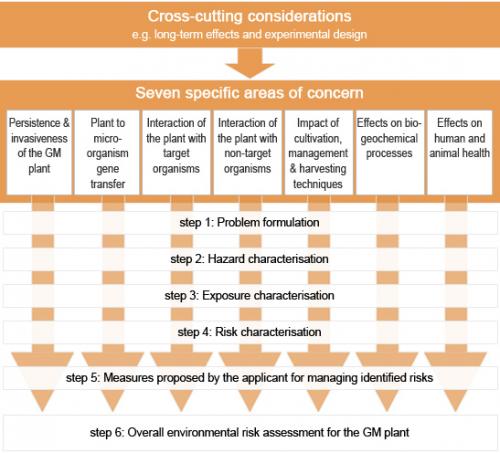 It should be noted that the environmental risk assessment also applies to medicinal GMOs used during gene therapy trials or vaccination or being the subject of a marketing authorisation application.

In the case of deliberate release, the risk assessment is a comparative exercise, aiming at identifying possible differences between the GMO and its non-genetically modified equivalent, followed by an assessment of the nutritional, health or environmental impacts of these differences. This approach by comparison is based on two concepts: the concept of familiarity and the concept of substantial equivalence.

The basic principles of biological risk assessment have emerged from work carried out on an international level, in particular at the OECD (see also the section "Historical background"). This trend was pursued and even strengthened over the years as illustrated, for example, by the work carried out within the scope of the Codex Alimentarius​ in relation to food standards and within the scope of the Cartagena Protocol on Biosafety. In these instances, like in others, groups of experts are regularly brought in to refine, specify or illustrate the biological risk assessment methodology, for example in order to apply it to new types of organisms (insects, trees, fish, viruses, etc.) or to new characteristics (for example, drought-resistance or resistance to other extreme conditions). Although certain aspects of biological risk assessment are sometimes requestioned (for example the application of the concept of substantial equivalence in the assessment of GM foods), the general principles remain unchanged to this day.

With time, the scientific representation of experts involved in biological risk assessment has also evolved, especially in the field of GMOs. Whereas molecular biologists had been predominant in the early days of biosafety, this discipline has now been joined by environmental scientists, nutritionists, toxicologists and allergists.

The volume of useful scientific data and case studies supporting risk assessments has also grown considerably over time. This development has obviously contributed to improving risk assessment. However, it has also paradoxically led to an increase in questions. As Di Castri indicated in 1992, "Knowledge is like a sphere. By increasing its volume, the surface in contact with the unknown increases" (Di Castri F. L’écologie en temps réel. In Theys J. et Kalaora B., (Dir.) La terre outragée. Les experts sont formels! Ed. Autrement, Paris, 1992).

The fact that risk assessment opens up new questions is nothing unusual, just like the absence of consensus between scientists on the interpretation of certain data. Indeed, this is inherent to a scientific approach, which is not univocal but contradictory. These questions should lead to the implementation of new research and to the emergence of additional data. Unfortunately, financing problems, the destruction of field trials of transgenic plants, the lack of interest in this type of research or other factors also hinder the development of research in the field of biosafety.

Additionally, all too often, scientific controversy, rather than encouraging scientific debate, encourages polemic. This has been very apparent in recent years in the field of GMOs. Several factors have caused this: the disclosure of preliminary scientific results to the general public, the abusive generalisation of scientific conclusions, the separation of certain experimental results from their context (biological risk assessment is an incremental and holistic process in which scientific data should be considered in their entirety), or even the confusion between "hazard" and "risk".