​Notification of field trials with GM plants in Belgium - Some figures

In 2002 and 2003, the Ministers for Public Health and the Environment decided to reject three field trials, despite positive advice from the ad interim Biosafety Advisory Council. These rejections related to a trial with a genetically modified (GM) apple tree by Plant Research International in April 2002, a trial with transgenic oilseed rape by Aventis in April 2002 and a trial with GM apple trees by the Catholic University of Leuven (KUL) in April 2003.

These decisions were remarkable in more than one way. Firstly, they broke with the previously prevailing decision-taking procedures, which had followed the scientific advice submitted by the experts. Secondly, they were based, in certain cases, on considerations other than those relating to the potential risks to human health and the environment, i.e. the relevance of, or purpose served by, the trials proposed.

The Belgian biotechnology industry announced its voluntary halting of field trials in a press release issued at the end of 2002. In so doing, the industry sought to ring warning bells for the Government about the state of scientific research in Belgium in the field of agro-biotechnology (illustrated by the sharp fall in the number of field trials in 2001 and 2002, and coincidentally by the closure of several research centres of biotechnology companies). It called on the Government to draw up a clear, coherent and transparent policy in this field and asked that no requirements be laid down at Belgian level in addition to those imposed by the European Union. 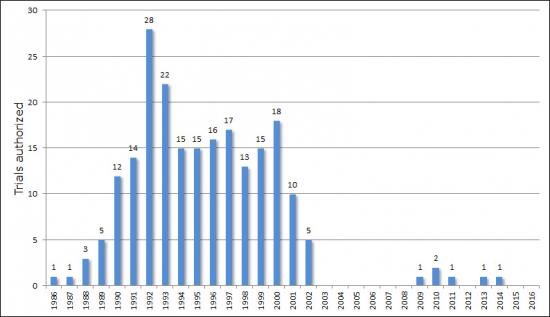 It is important to stress that each notification relates to a single GMO (case-by-case assessment) and that some dossiers may be the subject of an authorisation valid for several sites and for several years (Directive 90/220/EEC, which was in force in Belgium until 2005, established two types of procedure for experimental release: a standard procedure - for a one-year authorisation - and a simplified procedure making it possible for authorisations extending over a number of years to be issued..

The number of authorisations for the experimental release of GM plants increased between 1986 and 1992 (28 dossiers), then gradually declined until 2003. In terms of surface area, the top was reached in 2000, with a total of 18 field trials underway, covering a total surface area of 110.7 hectares. In 2003, the biotechnology private sector informed the Belgian Government that it would submit no new dossiers until the legislation on the experimental release of GMOs into the environment had been implemented clearly. The sector decided to halt the trials underway (see text box). The entry into force in 2005 of the new Decree transposing Directive 2001/18/EC has done little to change this situation. Very few dossiers have been submitted since then.

A detailed description of each of the field trials (description of the GMO, scientific advice, terms and conditions for authorisation) is available on this website. Information is also available on the European Commission Joint Research Centre (JRC) database, which contains all the applications for deliberate release into the environment within the EU. 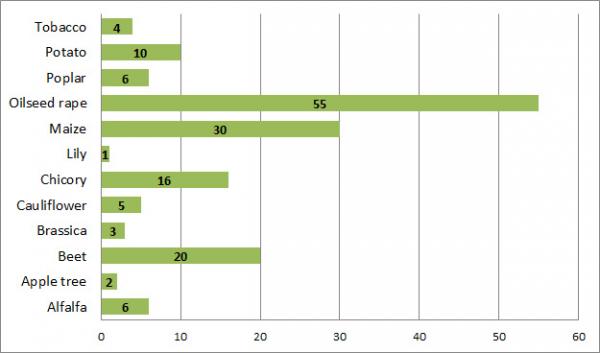 The characteristics most commonly tested were male sterility with a view to the development of hybrids and tolerance to glyphosate (Roundup) or glufosinate (Liberty) herbicides. In the last years however only plants with quality traits and pest resistance have been tested. 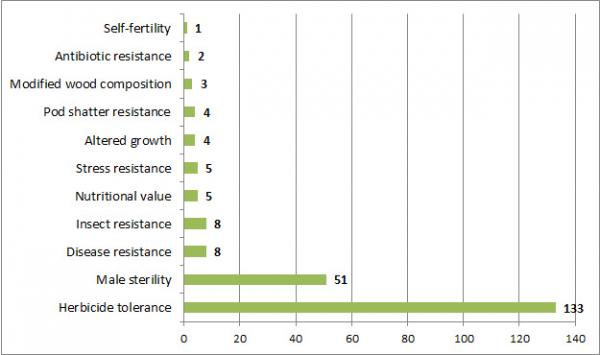 To summarise, to date, what has primarily been cultivated in Belgium, has been GM oilseed rape. This principally relates to field trials undertaken in the second half of the 1990s and which involved GM lines of the oilseed rape MS8xRF3 (SeedLink hybrid system). These lines were cultivated essentially for purposes of seed production for the development of new varieties, pending European authorisation for the placing on the market of the corresponding GMO.