Scientific communication by the SBB

Informing and interacting with various target audiences is an integral part of the work of a public service institution such as Sciensano. As a centre of biosafety expertise and archiving, the SBB holds a large amount of scientific and legal information that is likely to be of interest to different groups. In the heated context that surrounds the public debate on GMOs, official and independent bodies such as the Biosafety Advisory Council and the SBB have a role to play in the distribution of objective, transparent, reliable and referenced scientific information.

Since the creation of the SBB, its experts have therefore strived to meet the needs of the general public and stakeholders via different forms of communication and information. Various initiatives also aim at reinforcing the link and partnership with scientists that are interested or involved in biosafety-related issues and whose domain of research and expertise might help to develop a better understanding or evaluation of the potential risks associated with the use of GMOs.

The SBB is the national focal point for the information exchange mechanism set out by the Cartagena Protocol on Biosafety, the so-called "Biosafety Clearing-House".

On a regular basis, the SBB organises or participates in the organisation of European/ international scientific events. Recent initiatives include:

Sciensano, in particular its Servvice Biosafety and Biotechnology (SBB), has played a key role in the implementation of biosafety, as a pioneering body in the early days and then as a permanent center of expertise for the Belgian authorities and the Biosafety Advisory Council.

It is this expertise and experience that the SBB is sharing in a book which was published in December 2010. This book retraces, through an historical overview and detailed facts and figures, the story of 20 years of biosafety in Belgium in its evolutionary context, showing how the implementation of a centralised system for the risk assessment of GMO and pathogens has enabled Belgium to develop highly valued, internationally recognised, scientific expertise in this area. The book also presents some prospective thoughts about what could be the future methodology and substance of the scientific assessment of biological risks.

This historical and descriptive part is completed with several testimonies from people who have been involved, or are still involved, in various ways in the field of biosafety in Belgium, showing how the expertise within the SBB has grown thanks to the permanent interaction and collaboration with partners from different fields. 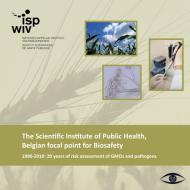 The Scientific Institute of Public Health, Belgian focal point for Biosafety. 1990-2010: 20 years of risk assessment of GMOs and pathogens

The experience acquired in assessing biosafety applications and analysing the corresponding scientific literature has been harnessed by the SBB to design teaching and training modules for users and the authorities.

Currently, these modules are primarily aimed at those involved in the contained use of GMOs or pathogenic organisms. These modules are adapted to the needs of the users each time. However, the basics remain the same: awareness of risks associated with the handling of GMOs and pathogenic organisms, introduction to risk assessment methodology, description of applicable risk management measures. The modules combine theoretical descriptions, examples of the activities concerned and practical exercises.
Training sessions are regularly delivered to staff of the inspection departments of Belgium's Regions and Communities. Since 2009, the SBB also introduced certified training for State scientific personnel, which focuses on laboratory biosafety.

Furthermore, since 1996, biosafety teaching and awareness modules covering all aspects of the discipline have also been taught at Belgium's universities and Hautes Écoles. These modules are taught by SBB experts as part of general courses or specific training in biosafety.

From 2003 to 2006, the SBB has contributed to the organisation and implementation of a project in partnership with developing countries to train delegates from those countries in the use of the Biosafety Clearing-House of the Cartagena Protocol.

The use of modern biotechnology and its implications in terms of biosafety has been the subject of debate in society for several years. In this respect, initiatives have been undertaken by the Belgian authorities with a view to establishing links between the different players in the worlds of science, the economy and civil society. As a centre of biosafety expertise, the SBB has participated in several of these initiatives, for example: