Jump to: Commercial use of GMOs in the environment and/or as food/feed - Some figures

Authorisations for the placing on the market of GMOs are issued at European Union level. These authorisations involve the free movement of the authorised products throughout the territory of the European Union, hence all Member States are concerned.
Depending on the intended use(s) of the GMO, two procedures can apply:

Procedure 1: Placing on the market under Directive 2001/18/EC

Examples: GMOs released outdoor for industrial purposes (e.g. GM trees for paper or starch industry), for energy production (biofuels), for bioremediation (e.g. GM micro-organisms to break down contaminants), for landscape improvement, for ornamental use (e.g. GM cut carnation), for pest control (e.g. GM sterile insects).
How to apply ?
The authorisation procedure is based on interaction between the national authorities and the European Commission, involving a national phase followed by a Community phase. The applicant submits an application for authorisation to the national competent authority of an EU Member State. This Member State (lead country) becomes the "rapporteur" for this dossier and undertakes an initial assessment of the application.
In parallel the summary of the notification (SNIF - summary notification information format) has to be forwarded to the European Commission which makes it available to the public.

The lead country prepares an assessment report and sends it to the European Commission which forwards it to the Member States for comments. At this stage an assessment procedure is undertaken at EU level, during which the other Member States may submit comments, objections or requests for information on the notification. If objections are raised and maintained, the Commission asks for the opinion of the European Food Safety Authority (EFSA).

Inputs of the Biosafety Advisory Council and of the SBB

If Belgium is chosen as lead country for an application, the BAC is responsible for carrying out the risk assessment (see chapter “some figures”).

Most of the dossiers processed by Belgium under Directive 2001/18/EC (and previously under Directive 90/220/EEC) relate to dossiers submitted through other Member States (see also chapter “some figures”). The assessment of these dossiers is in most of the cases performed by the SBB on mandate of the BAC. The SBB contributes at two levels in relation with risk assessment:

Based on the assessment report and eventually the EFSA’s opinion, the European Commission proposes to Member States to grant or refuse the authorisation. A qualified majority is required to approve the Commission’s proposal. If a qualified majority cannot be achieved between the Member States (first at the Regulatory Committee under Directive 2001/18/EC, second at an Appeal Committee), the final decision is taken by the Commission.
Authorisations are valid for a maximum of 10 years and are renewable.
Under the new Directive (EU) 2015/412 Member States have the possibility to restrict or prohibit GMO cultivation on their territory either during the authorisation procedure, or after a GMO has been authorised for cultivation in the EU. 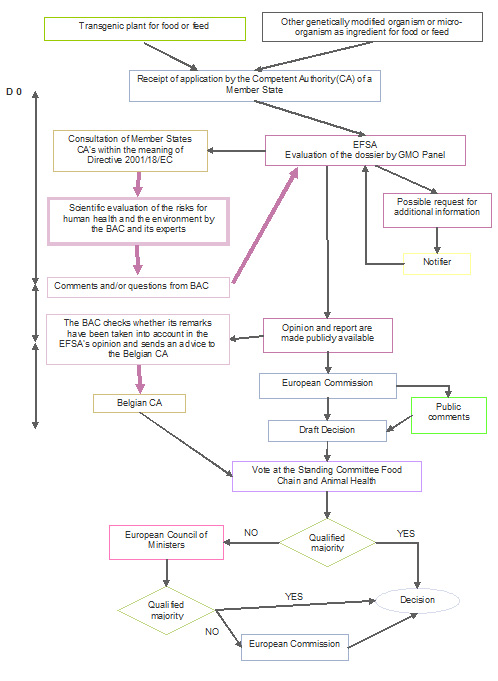 Examples: GM crops used as food and/or feed; Food or feed enzymes, additives, vitamins and flavourings containing, consisting of, or produced from GMOs (including from GM micro-organisms); Biomasses used as feed materials.

The placing on the market of GMOs for use as food or feed is governed by Regulation (EC) No. 1829/2003. The dossiers relate either to new GMOs or to applications for authorisation renewals submitted in accordance with Article 11 of the Regulation and relating to GMOs previously authorised under Directive 90/220/EEC or Regulation (EC) No. 258/97 but now expired.
The risk assessment procedure is centralised. The application is first sent to the national competent authority of a Member State, but the dossier is immediately forwarded to the European Food Safety Authority (EFSA) for a risk assessment.

When the scope of an application under Regulation (EC) No. 1829/2003 also covers cultivation, EFSA delegates the environmental risk assessment to an EU Member State which sends EFSA its Environmental Risk Assessment (ERA) report.

EFSA carries out the risk assessment of the application and draws up an opinion (published in the EFSA Journal), for submission to the European Commission and the Member States. The EFSA assessments are undertaken by the GMO Panel, a group of independent scientific experts assisted by specialised working groups.

The opinion is also made available to the public which has 30 days to comment on the European Commission website for applications under Regulation (EC) 1829/2003.

Normally, EFSA performs the risk assessment within six months of receiving the application. However several months, if not several years, may lapse between the submission of a dossier by the applicant and the publication of EFSA’s opinion. The time spans are often due to requests by EFSA for the applicant to provide additional information or experimental data.

The "GM food/feed" Regulation allows for a contribution by the Member States to the risk assessment process (Article 6.4). The Member States may submit their comments on the notification to EFSA during a 90-day consultation period (mandatory consultation procedure of the competent authorities established under Directive 2001/18/EC). When EFSA publishes its opinion, it must indicate in an annex to that opinion how the comments made by the Member States were taken into account in its corresponding opinion.

Inputs of the Biosafety Advisory Council and of the SBB

The Biosafety Advisory Council, with the scientific support of external experts and the SBB, takes part in the 90-day consultation procedure in respect to all GMO dossiers. Dossiers relating exclusively to derived products (flour, oils, sugars, etc.) are not examined by the Council.

Finally, since the end of 2005, the competent Minister has asked the Council to provide him with an advice on all dossiers submitted under the "GM food/feed" Regulation, in complement to the final opinion published by EFSA. This advice covers all aspects of the notification (molecular characterisation, environmental impact, nutritional and compositional analysis, toxicity and allergenicity). The Belgian authorities determine their position on the European Commission draft decisions primarily on the basis of this advice and the EFSA's opinion.

Based on the EFSA’s opinion, the European Commission proposes to Member States to grant or refuse the authorisation. A qualified majority is required to approve the Commission’s proposal. If a qualified majority cannot be achieved between the Member States (first in the Standing Committee on Plants, Animals, Food and Feed, second at an Appeal Committee), the final decision is taken by the Commission.
Authorisations are valid for a maximum of 10 years (renewable).