This section relates to field trials with genetically modified (GM) plants but also applies to the experimental (i.e. non-commercial) release in the environment of any GMO (e.g. insects, fish, mammals, micro-organisms).

Field trials with GM plants are a logical step in the development of new plant varieties with modified characteristics. After having undertaken genetic modification, selection, a first screening and molecular analysis of the GM lines in a laboratory or greenhouse, small-scale trials are undertaken to monitor, in the natural environment, the stability and expression of the characteristic(s) introduced, the agronomic properties of the plant, and safety for health and the environment. In the final stage, preselected elite lines are crossed with other varieties to transfer the transgenic characteristic(s) to several varieties adapted to different climatic conditions, etc. Finally, as with traditional varieties, GM lines are tested before any registration in the catalogue of varieties.

An individual or a company who wishes to release a GMO into the environment for experimental purposes must first obtain a written authorisation from the national authority of the country within whose territory the experimental release is to take place.
In Belgium, this authorisation is currently issued in accordance with the provisions of Part B of the Royal Decree of 21 February 2005.

Before submitting a notification, the notifier is invited to contact the federal competent authority to clarify the procedural requirements and the content of the notification.

The information to be provided in a notification is specified in Article 13.2 of the Annex III of the (modified) Royal Decree of 21 February 2005 on the deliberate release of GMOs (the consolidated version of the Royal Decree is available in French and in Dutch).

For new notifications the standard authorisation procedure applies. It is described in Articles 15-18 of the Royal Decree of 21 February 2005 and set out schematically in the figure below. 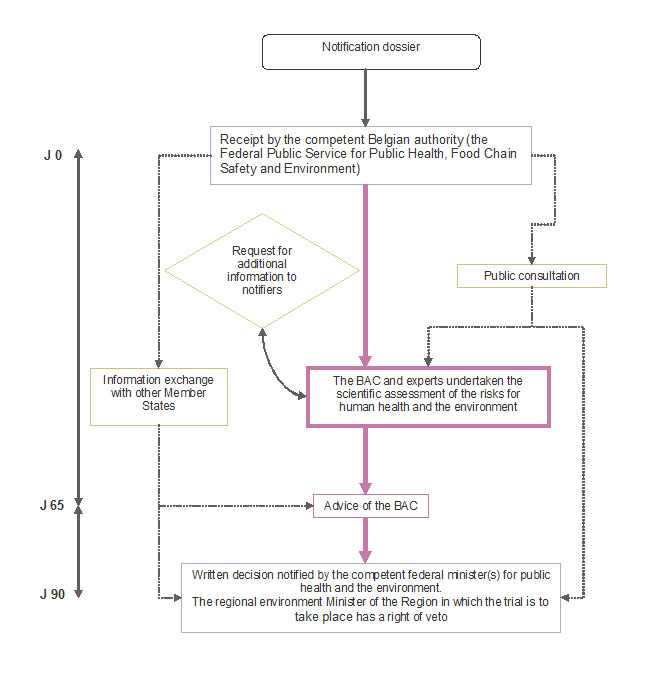 To summarise, the application (called "notification") is received by the competent federal authority (currently the Federal Public Service Health, Food Chain Safety and Environment).
The competent authority then asks for the Biosafety Advisory Council for its advice on the assessment of the potential risks for human health and the environment associated with the field trial.
In parallel, a public consultation procedure is organised (and supervised by the competent authority). Comments by the public relevant to biosafety issues are taken into account by the Council in drawing up its advice.
Finally, the decision on the request for field trial is taken by the federal Minister(s) competent for public health and the environment based on the Council's advice and the outcome of the public consultation. The regional environment Minister for the Region in which the trial is to take place has a right of veto however.
In addition, a summary of the notification, termed SNIF (summary notification information format), should be made available. The SNIF needs to be completed in English. A template is available on the web site of Joint Research Center (JRC) of the European Commission. This form is forwarded to the European Commission and to the other Member States for potential comments and is published on the JRC web site.

The federal competent authority may accept that releases of the same GMO or combination of GMOs on the same site or on different sites, for the same purpose and during a specified period, are subject to a single notification.

Next to the classical procedure the notifier has the possibility to apply for a differentiated procedure, according to Article 19 of the Royal Decree of 21 February 2005. This applies in cases where sufficient experience has been obtained of releases of certain GMOs in certain ecosystems and the GMOs concerned meet the criteria set out in Annex V of the Royal Decree. This procedure involves the European Commission and the Member States.